I love it when I’m given free creative reign over a project. When the FirstKids Choir put on their musical, Sandcastles & Surfboards, I had the opportunity to do some cool stuff with their promotion. The Children’s Ministry productions don’t always get the most marketing attention, so I wasn’t bound much by what was “done last year.” Since the musical was inspired by the 1960s Beach Party movies, I decided to model the promo poster after those movie posters. We took the two main characters up to the green screen studio and did a quick photo shoot, and then I worked on compositing them with some other beach images. The result was this poster: 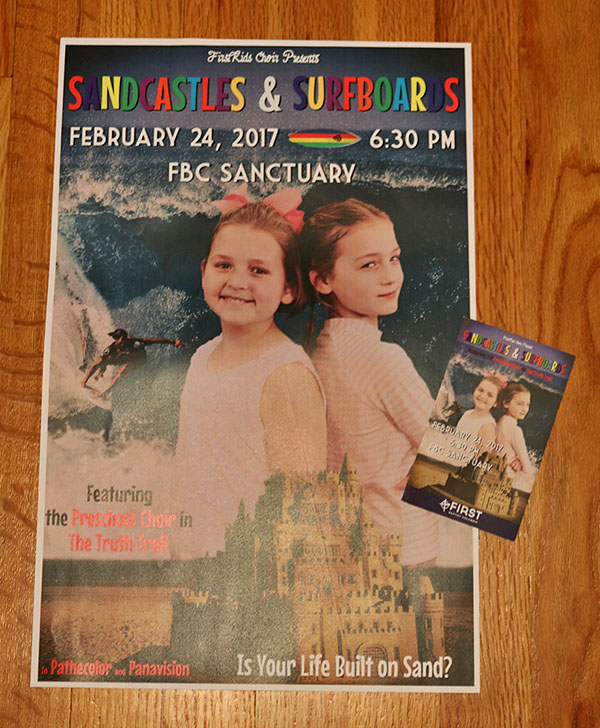 Pictured with the poster is the 3×5 inch invitation card that they gave to the children to give out to friends and family. Here’s the back of that card. It has room for personalization. 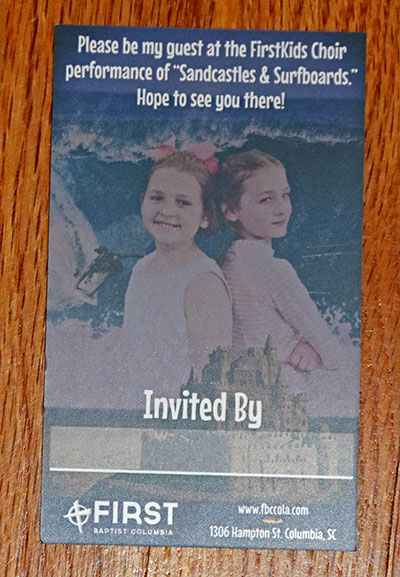 The most fun that we had though, was creating this dramatic film trailer for the production. We were filming several members of the cast in the green screen studio for parts of the production and decided to get the two main characters to read some of the best, most dramatic lines for the trailer. The point was to be super dramatic and cheesy, but humorous. I added backgrounds to the green screen shots, dramatic music, stock footage, and wrote and recorded the voiceover.

In addition to the graphics, we pushed the dramatic trailer out on social media, the website, and e-newsletter. The kids had fun and got to see some of the types of things that go into the movies that they enjoy. They’re a sharp group and were a joy to work with. In the end, the musical saw a record number of audience members in attendance. We worked hard to build some hype around this FirsKids musical and the efforts paid off. If anything, people were intrigued by the trailer and had to see what all of the drama was about. 😉

After I created and pushed out the media, I decided to make a behind the scenes video for the church’s website to give everyone a look into what all goes into media creation. Of course, even this video had several purposes. 1) It engaged church members and pulled them into some of the operations of the church that they don’t get to see. 2) It was put into a blog post on the website, so it added content to the site, thus helping to keep the FBC website up in search engine rankings. 3) It created content for social media (also helping our search engine rankings. 4) It still helped promote the FirstKids musical. 5) It was fun.

So there you have it, integrated marketing at it’s coolest, and all done on a shoestring budget. It just goes to show that you don’t have to have a ton of money or the slickest acting to build momentum, get people excited about your event, and increase attendance, all while helping some of the kids realize their interests and potential.