10 Christmas Songs That I Hate

Happy Festivus! It’s time to air some grievances! There’s a lot of bad Christmas music out there. That’s probably why there’s such a divide between people who love to listen to Christmas music year round or who at least count down the days until it is socially acceptable to listen to it and people who can’t stand it and dread the holiday season because of the new earbleading sounds that they will inevitably encounter. I think those people are also known as optimists and realists. I don’t hate all Christmas music. There’s some Christmas music that I absolutely love. This list does not contain any of those songs though. This is an ode to the sucky side of Christmas.

I don’t really care for Newsong. They remind me of a lot of what was bad with 90s Christian music (there were some good parts, but there were even more really bad parts). Then Newsong made things worse by coming out with this stupid song. I haven’t listened to it in a while and I refuse to listen to it again. The premise is this little boy’s mom is dying, so he goes to buy her some fancy shoes so she’ll look good when she meets Jesus. The song is all about that. My response to that is, “What The Crap?!” First of all, that’s a terrible and sad Christmas story. Second, why would he be obsessed with buying his mom some shoes? Maybe he should try to just spend those last few moments with her. Third, it’s manipulative. I think that’s really why I hate this song. It is designed to make us cry and envoke emotional response. It has no value to it. It has no purpose. It just exists to make us cry. Just like a lot of 90s CCM.

Then a movie was made based on the song. Not even cute Rob Lowe could save that movie. Not that I ever saw it, but I can tell by the movie poster that it sucks. It’s all a ploy to make money.

It’s a cutesy song about date rape. Listen to the lyrics. Think about it. No means no, man.

No one wants to listen to a bunch of overprivileged celebrities lecture them about how there are poor people who won’t get to experience Christmas this year. Also, it contains a lyric, “And there won’t be snow in Africa this Christmastime” which is like, “duh!” There won’t be snow in South Carolina either. I guess we’re all poor and Christmasless too. Maybe some celebrities will hold a benefit concert for us.

The 2014 version was even worse than the original. I don’t even know who half of these people are.

John Lennon wants you to feel guilty. Yoko Ono squawks at the end. It’s Imagine for Christmas. There are better ways to get people to care than guilting them with images of dying children.

I had to produce a video for this song for a Christmas pageant. I heard it about ten too many times. It really gets stuck in your head though! “Christmas in Dixieeeee; It’s snowin’ in the piiiiiiiine …”

When performed well, this song is one of the best Christmas songs ever. When it isn’t done well though, it’s terrible. Like Leonard Cohen’s Hallelujah, it has been covered about a billion times, yet few have done it well. And it seems that many attempt it just to show off their range.

I don’t remember anywhere in the Gospels where a little boy with a drum shows up to see Jesus. Maybe it was in the Apocrypha …

I hate this song so much that it deserves to be on the top 10 list twice. 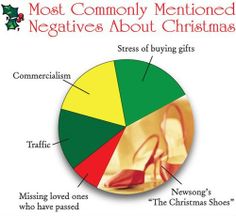 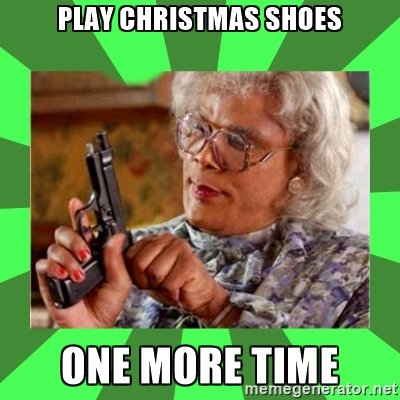